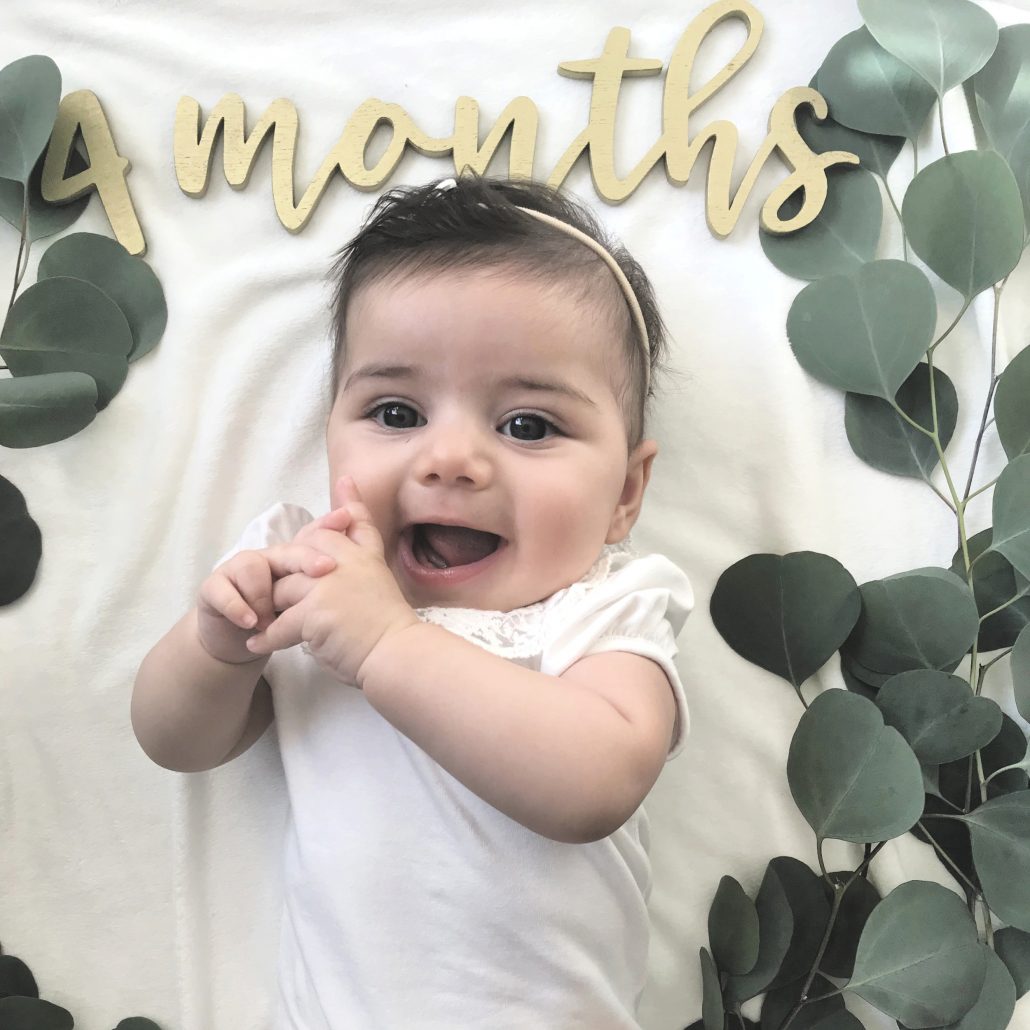 This month, little Eva turned four months and I am here to tell you, and I’m sure any mom of a four month old can agree, that the four-month regression, is real. It’s the real deal, and it’s permanent.

So in order to understand what’s happening to your baby during this stage, first you need to know a few things about sleep in general. So here’s the science-y part, told in plain English.

Many of us just think of sleep as an on-or- off situation. You’re either asleep or you’re not. But sleep actually has a number of different stages, and they make up the “sleep cycle,” which we go through several times a night.

Stage 1 is that initial stage we’re all familiar with where you can just feel yourself drifting off, but don’t really feel like you’ve fallen asleep. Just keep a close eye on hubby as he’s binge watching Netflix next time. He’s probably nodding off in front of the TV, you tell him to go to bed, and he responds with “I wasn’t sleeping!” (Insert eye-roll because we all know he was).

Stage 2, which is considered the first “true sleep” stage. This is where people tend to realize, once woken up, that they actually were sleeping. For anyone taking a “power nap,” this is as deep as you want to go, or else you’re going to wake up groggy.

Stage 3 is deep and regenerative. Also known as “slow wave” sleep, this is where the body starts repairing and rejuvenating the immune system, muscles tissue, energy stores, and sparks growth and development.

Stage 4 is REM (rapid eye movement) sleep. This is where the brain starts to kick in and consolidates information and memories from the day before. It’s also the stage where we do most of our dreaming.

Once we’ve gone through all of the stages, we either wake up or come close to waking up, and then start over again until the alarm goes off.
So what does this have to do with the dreaded regression we were talking about originally?

Well, newborn babies only have 2 stages of sleep; stage 3 and REM, and they spend about half their sleep in each stage. But at around the third or fourth month, there is a reorganization of sleep, as they embrace the 4-stage method of sleep that they’ll continue to follow for the rest of their lives. When this change takes place, baby moves from 50% REM sleep to 25% in order to make room for those first two stages. So although REM sleep is light, it’s not as light as these 2 new stages that they’re getting used to, and with more time spent in lighter sleep, there’s more of a chance that baby’s going to wake up.

As adults however. when we wake in the night, we’re able to recognize that, “Hey, I’m here in my bed, it’s still nighttime, my alarm isn’t going to go off for another three hours, I can go back to sleep”.

And we do. Usually so quickly that, the next morning, we don’t even remember the brief encounter with consciousness.

A four month old baby, of course, lacks these critical thinking skills. To a four month old baby who fell asleep at her mother’s breast, the reasoning could go much more to the tune of, “OK, last thing I remember, there was a familiar, beloved face, I was having dinner, and someone was singing me a soothing song. Now I’m here in this dark room, there’s no food, and there’s no one singing to me.

Now that baby’s suddenly realized that Momma’s not around, and they’re not entirely sure where they’ve gone, the natural response is to do a little freaking out. That stimulates the fight-or- flight response and, next thing you know, baby’s not going back to sleep without a significant amount of reassurance that everything is OK.

The other major contributor to this 4 month fiasco, I find, is that up until this point, parents have either been putting their baby to sleep with a pacifier, or by rocking them, or by breastfeeding them, or some similar technique where baby is helped along on the road to falling asleep.

Now that baby’s spending more time in light sleep, and therefore has a higher probability of waking up, this suddenly becomes a much bigger issue. These sleep props or sleep associations can be very sneaky indeed, because although they may be helpful in getting your little one to that initial nodding off stage, the lack of them when they wake up means that baby’s not able to get back to sleep again without some outside help.

Cue the fight-or- flight, the crying, and the adrenaline. When this starts
happening every half an hour, parents can find themselves in a nightmarish situation.

So, onto the big question. What can you do to help your little one adjust?

First off, get all of that light out of baby’s room. I’m not kidding about this one. You might think that baby’s room is dark enough, or that baby might not like the dark, and that it’s comforting to have a little bit of light coming through the windows or seeping in from the hallway.

Nope. Baby’s room should be dark. I mean moonless night kind of dark.

Newborns and infants are not afraid of the dark. They are, however, responsive to light. Light tells their brains that it’s time for activity and alertness, and the brain secretes hormones accordingly, so we want to keep that nursery absolutely pitch black during naps and bedtime.

The other nemesis of daytime sleep, (and nighttime for that matter, although not nearly as often) is noise. Whether its UPS ringing the doorbell, the dog warning you that the squirrels are back, or something falling on the floor three rooms away. With baby spending more time in lighter sleep, noises will startle them easily and wake them up, so a white noise machine is a great addition to your nursery.

“Wait, isn’t that a prop,” you’re asking. Well, in a way, it is, but it doesn’t require any winding, resetting, reinserting, or parental presence. It’s just there and it can be on as long as baby’s sleeping, so it’s not a prop we need to avoid.

Bedtime routines are also an essential component to getting your baby sleeping well. Try to keep the routine to about 4 or 5 steps, and don’t end it with a feed. Otherwise, you risk baby nodding off at the breast or the bottle, and that will create the dreaded “association” that we talked about earlier.

So try to keep the feed near the beginning of the routine and plan the songs, stories, and getting into PJs towards the end. The whole process should be about 20 – 30 minutes long, and baby should go into their crib while they’re still awake.

If you’re noticing baby getting fussy before bedtime, you’ve probably waited too long. Four month old babies should really only be going about two hours between snoozes, and bedtime should be between 7 and 8 at night.

Now, there are going to be regressions, actual regressions, later on in your little one’s youth. Traveling, illness, cutting teeth, all of these things can cause your little one to have a few bad nights in a row. But when it comes to the four months “progression,” I’m happy to report that this is a one-time thing. Once you’re through this, your baby will have officially moved into the sleep cycle that they’ll essentially be following for the rest of their life. Four glorious stages repeated multiple times a night.

And by taking this opportunity to teach them the skills they need to string those sleep cycles together, independently, prop-free, without any need for nursing, rocking, or pacifiers, you’ll have given them a gift that they’ll enjoy for the rest of their young lives.

Of course, some kids are going to take to this process very easily and some are going to be a little more resistant. If yours falls into the first category, count yourself as lucky, take delight in your success, and go ahead and brag about it on Facebook.

For those of you in the resistance category, I’m happy to help in any way I can. Just visit my website or give me a call and we can work on a more personalized program for your little one. The  most common thing I hear after working with clients is, “I can’t believe I waited so long to get some help!” So if you’re considering hiring a consultant, now is absolutely the time. I offer a free 15 minute evaluation so I can get to know the specifics about your little one’s situation, so book a call now and we can move forward as soon as you’re ready to get your little one sleeping.

Meet my little Eva for her 4 month photos. 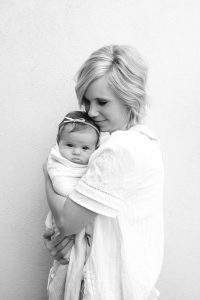 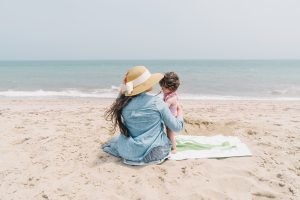 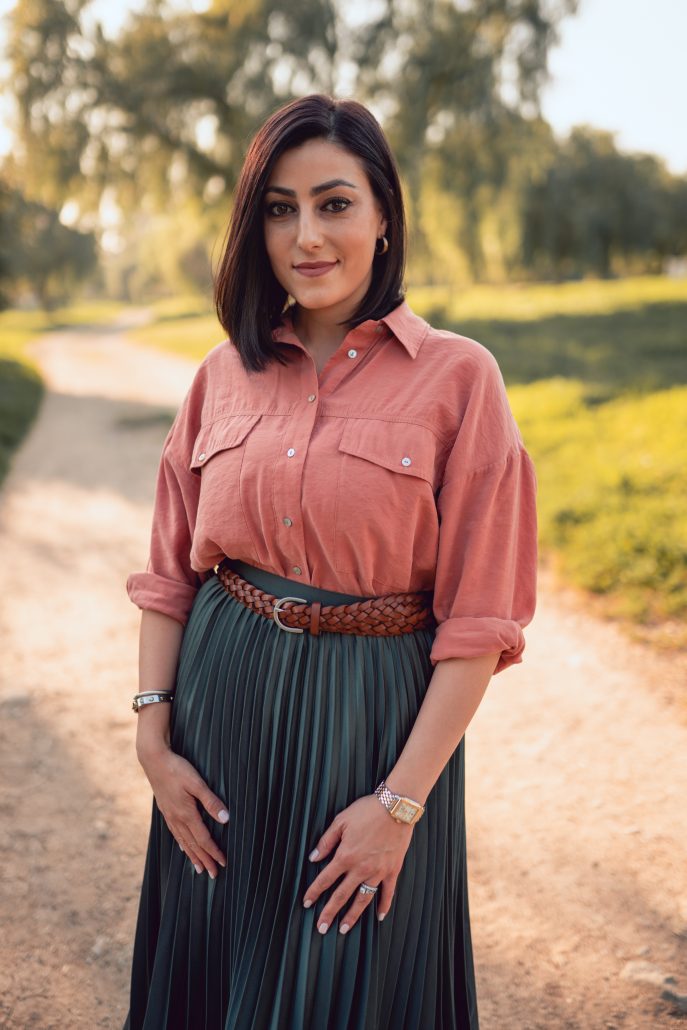 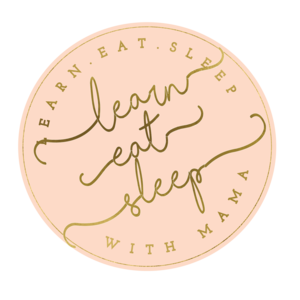